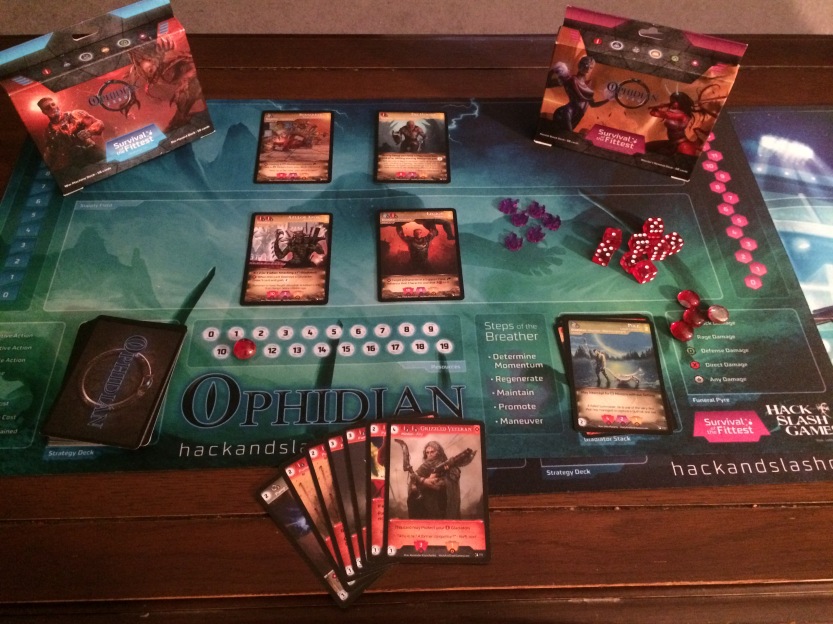 Greetings all! It’s a new year, and hopefully everyone is off to a great start! I want to quickly start by saying that this year, I will not be doing any sort of Top 10 favourites, or anything of the sort, as my life in 2016 was in the way on far too many occasions to really get a solid grasp on what I think was great in 2016. My goal for this year however is to have enough games played, that I can make a worthwhile one this time next year. But, this isn’t why you’re here, so let’s get into this review shall we? This game is a card game called Ophidian 2360.

This is a game in which you will pick Gladiators who will represent you for your battles in the arena. You will have ten points exactly to spend on putting your gladiators together, and you can have up to four gladiators to start your game. The gladiators will have levels on them, which can be upgraded for use of more powerful cards, as well as they each have disciples which tell you what type of card you can play. This is distinguished by the colour of the card. On the battlefield, you will have two rows which you can play creatures. The front row is the row which you can attack in, and the back is reserved more for support cards or cards you would like to keep for another turn without them taking as much damage. On top of the battle, you can also gain cheer. This happens during an attack, and goes to either the player who attacked, or to the defender if they “intercept” the attack. Cheer is gained from the “crowd” which is watching the gladiator battle. During each round, players will play cards which will either give them positive or negative momentum. If they play a positive momentum card, you may play another card. If, however, you play a negative momentum card, the momentum will exchange to their opponent, and they will have an opportunity to play cards. This will continue until both players decide to make no more moves in the round, at which point turn are reset and you draw 7 more cards and start the next round. This continues for 4 rounds unless you successfully destroy all of your opponents gladiators, or meet another of the win conditions to the game. This is a basic breakdown of the game and while this is the basics, there is much more to learn.

Ophidian 2360 is a gorgeous looking game. In my package to review, I received 2 playmats, 4 decks to play with, and Rage Token counters. The quality of all the pieces were very good. Everything was packaged nicely and all tied together well. I found that the cards may have been slightly thin, but not enough to lower the life expectancy of the cards with play. One of the only things I noticed with the theme of the cards is that is slightly scattered. Maybe it is mainly the fact that I don’t see themes crossing over in such a manner, but it seems odd to have cards that are based around a fantasy theme, fighting against cards based upon sci-fi. Other than that odd choice of really spreading out the theme, the art itself is magnificent, and all the information you need is found clear and concise on the cards. 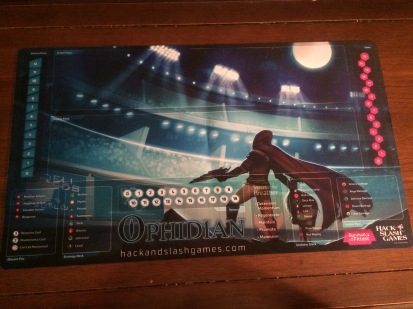 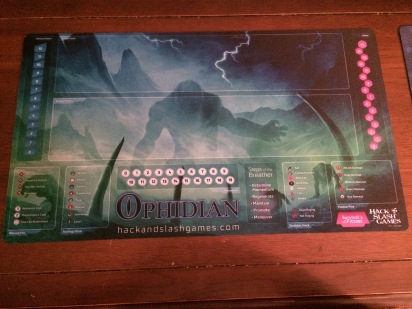 My favourite part of this game the interaction and decision making within the rounds and battles. It gives you a fresh new way to battle, and that is something that is always welcome for me. The way it gives you an opportunity to either take a hit, or sacrifice another creature to save you really makes it an interesting battle. As well, the fact that there isn’t any specific cards to represent energy in your deck frees up space for more creatures and spells. The energy available for you to use cards on your turns is whatever you have on your gladiators at the time. Each gladiator uses a different Discipline to call upon different minions and spells throughout the game. As well, I am a sucker for spending time building a deck of cards that work well together to make interesting win conditions. So there is always something to do, even if you don’t have an opponent all the time to battle.

What’s Not to Love?

There was only really one thing that wasn’t for me and that was that I really wasn’t a fan of how spread out the lore of the game seemed to be. It’s awesome that they wanted to go in so many directions with the game, but having demons facing half human half robot with no background as to why they are in the same universe doesn’t make a ton of sense to me. Maybe there are stories online or something that I didn’t find while I was searching the game, but without them, it is tough to see the direction of it, which sort of ruins the theme for me personally. Game play wise however, there is nothing to complain about and it seems to be fairly well balanced along with being not too intense on reading, and understanding intricate rules right off the hop. On top of that, the decks are meant to be completely customized, so balance out of the box isn’t super essential.

This game was decent in my mind. It hasn’t yet really blown me out of the water with anything, but given some more time, and card options, I could see myself spending a lot of time fiddling with cards and how they work together in the best way for the deck. I think if the game had some back story, or pulled the reigns back a little on the types of units that are in the battlefield and available in the game, it could even thematically be great. Overall, I would say Ophidian 2360 will probably see a match or two every month or so in my house, and I will likely keep an eye open for more available cards as time goes on.

That is my first assessment of Ophidian 2360 all wrapped up for you. I hope it gives you some insight as to what you may or may not enjoy about it! Have a great week, and remember, I love you all!